Look at the pictures on this page to see the differences in color between cereal grass from Pines and from other growers, especially those that originate from China. Even without analysis, the color of these powders indicates they are not what is claimed or are at least not grown in accordance with scientific research.  A cereal grass that costs half or less than what you get from Pines may not be cereal grass at all.  It might be flag grass hay with about 25% of the nutritional value of Pines.  Do you really want to lower the overall nutritional value of the product you produce by putting in ingredients that provide virtually no nutrition? 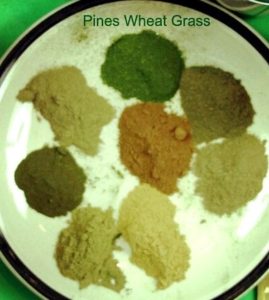 At a recent ingredient trade show, two Pines/Cerophyl representatives walked the show and stopped at every booth that claimed to sell wheatgrass.  Most were from China. Of all these wheatgrass powders only a few were even green.  Most were yellow, brown, or grey. 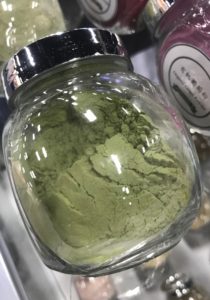 To the left is the greenest sample of wheatgrass our people found from a China company  Compared to wheatgrass from Pines/Cerophyl shown below that was grown correctly, products called wheatgrass from China are pale green at best. The products are either not wheatgrass or are something other than wheatgrass. Clearly whatever they are, the growing methods are not natural. 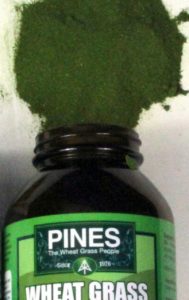 The literature of one of the U.S. re-sellers of Chinese wheatgrass reflects the ignorance of Chinese growers. The bottom picture shows the text. It is complete misinformation. It claims wheatgrass grown unnaturally in a tray is no different than growing it through the winter in an appropriate climate like Northeastern Kansas. The “father of wheatgrass,” Charles Schnabel, who dedicated his life to the scientific study of these grasses from the 1930s to the 1970s, never would have considered growing wheatgrass so unnaturally for such a short period in such crowded unnatural conditions.  Our farm grew cereal grass for Schnabel starting in 1932.  Our laboratory is what Schnabel used for his research.  Look at the graphs at the difference between growing it correctly and harvesting for high nutritional value and growing it tall for massive profits.

If these Chinese growers used the wheat seed to grow their products, the pale and poor color indicates unnatural growing conditions. Wheatgrass should look like the picture of Pines Wheat Grass above. Besides the pale color, the yellowish tinge of the pale material shown in the literature below indicates a long period since harvest with storage in a warm warehouse. It has virtually lost all its nutrition.

The re-seller makes these false claims below despite massive data over the last 80 years that disputes the statements.  Real wheatgrass must grow in cold weather to reach the jointing stage.  Growing it unnaturally in trays results in a high mold and bacterial levels. Further, the nutritional levels are 25% or less than real wheatgrass. Whether knowing or not, this re-seller is damaging its own reputation by using such erroneous literature and selling such an inferior product. Worse, they claim it is wheatgrass, which gives real wheatgrass grown correctly a bad name. What they sell might have grown from the wheat seed, but the growing method was clearly very unnatural and not correct.

China Does Not Understand How to Grow Wheatgrass 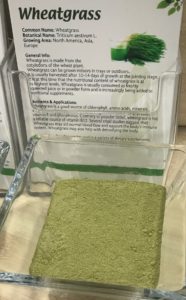 It takes between 60 and 200 days in cold weather to reach the “jointing stage.” That’s only when cereal grasses reach their absolute peak of nutrition. The science is very clear about that. Yet, either through ignorance of an attempt at some kind of strange revisionism, these purveyors of misinformation even imply that wheatgrass grown in a tray can reach the jointing stage and does it in about 10-14 days.  Nothing could be further from the truth!

The grower of the wheatgrass in the picture was likely from China. That’s because the color appears the same as another Chinese wheatgrass at the trade show, it is not even close to the dark green color of real wheatgrass grown by Pines/Cerophyl shown above. In more than 90 years of growing wheatgrass in Northeastern Kansas, farmers have never produced a product with that weird color. Moreover, the pale looking material comes with completely fabricated facts.  Whether it is organic or not is questionable. Clearly by the color it is not true cereal grass but rather flag grass hay.